Watching with Susan Granger: May 19 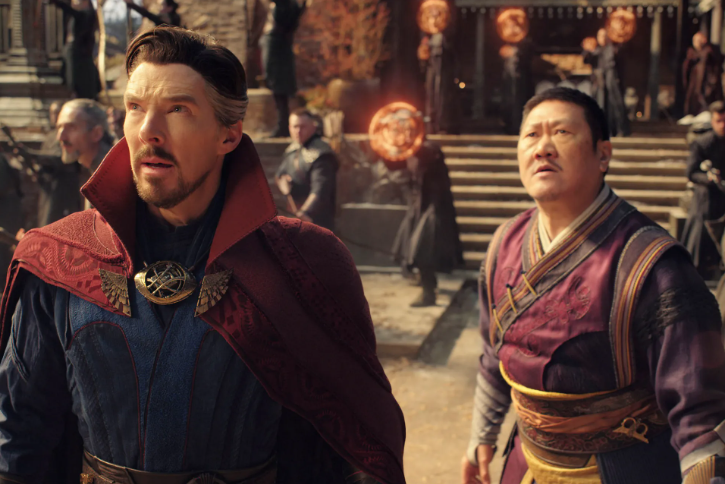 Marvel  Studios/Disney’s comic-book franchise dominates the box-office again with “Dr. Strange and the Multiverse of Madness,” which is preceded in theaters with the first teaser trailer for James Cameron’s highly-anticipated sequel “Avatar: The Way of Water.”

This new horror / fantasy / sci-fi adventure begins where “Spider-Man: No Way Home” left off – with Dr. Stephen Strange (Benedict Cumberbatch) coming to the assistance of a plucky teenager, America Chavez (Xochitl Gomez), who can open portals across various universes.

Chavez’s ‘origin story’ – shown in flashback – has her inadvertently catapulting her two lesbian mothers into another dimension when, as a child, she becomes frightened.   But – now – a demonic force, controlled by Wanda Maximoff/Scarlet Witch (Elizabeth Olsen from “WandaVision”), is trying to steal her portal-making powers so she can reunite with her twin sons in an alternate universe.

Strange tells Chavez: “In the grand calculus of the multiverse, your sacrifice is worth more than your life.”

So our quirky superhero must enlist the aid of a former sidekick who has now transformed into the Sorcerer Supreme (Benedict Wong) which leads to an encounter with his old comrade-turned-enemy Karl Mordo (Chiwetel Ejiofor), both members of a secret society called the Illuminati.

Then there’s Dr. Strange’s old flame, Christine Palmer (Rachel McAdams), who tells him that he’s now on Earth-838. Plus other ‘surprise’ MCU cameos.

Somewhat incoherently scripted by Michael Waldron with swarming storylines and multiple identities, it’s directed by Sam Raimi (“Spider-Man”), who relies too much on jump scares and gruesome, violent CGI, tossing in zombies, impalement, ogre henchmen and a bizarre bird whose body is comprised of corpses.

On the Granger Movie Gauge of 1 to 10, “Dr. Strange in the Multiverse of Madness” is a slogging, albeit scary 6, particularly when Dr. Strange concludes: “There might be another, other, other me.”

Set to turn 70 in June, Irish/American actor Liam Neeson has become known in recent years for his growling, tough-guy roles. But in the action/thriller “Memory,” he plays Alex Lewis, a professional assassin suffering from the beginning stages of Alzheimer’s / dementia.

But then Lewis realizes that his target is supposed to be an orphaned 13 year-old named Beatriz (Mia Sanchez) who was forced into sex work. That pushes every morality button in his body, and Lewis adamantly refuses to kill a child. Predictably, that decision does not sit well with his Mexico City contact Mauricio (Lee Boardman) and his ‘handler’ (Daniel De Bourg).

Complicating matters is the ineptitude and inherent corruption within the F.B.I.’s Child Exploitation Task Force which has attracted the attention of aging Agent Vincent Serra (Guy Pearce), along with his co-workers (Taj Atwai, Harold Torres).

Plus there’s the intricate involvement of a powerful real estate tycoon (Monica Belluci).

Based on the 2005 Belgian film “The Memory of Killer,” it’s superficially adapted by Dario Scardapane and formulaically directed by Martin Campbell, who never elevates the predictable production to big-screen standards. Instead, it plays like one of those weekly TV police procedurals.

While Neeson is still fit enough to participate in the carefully choreographed fight sequences, he readily admits he leaves the stunts to the stuntmen. And actor Guy Pearce’s presence was obviously predicated by his memory-afflicted role in the far-better revenge thriller “Memento.”

Perhaps the fantasy/adventure was doomed from the get-go.  Johnny Depp, who played villainous Gellert Grindelwald in the second installment, was just beginning his continuing domestic abuse battle with his ex-wife Amber Heard, forcing him to drop out.  And J.K. Rowling has alienated many fans because of her virulent anti-trans statements.

This third “Harry Potter” prequel begins as genteel Albus Dumbledore (Jude law) admits he was once in love with with his ‘dear’ friend Gellert Grindelwald (Mads Mikkelson) as they meet for tea in a chic Berlin café in the 1930s.

Overtly racist Grindelwald loathes Muggles – a.k.a. ordinary people who don’t have magical powers. “With or without you, I’ll burn down their world, Albus,” he threatens, expressing his domineering disdain for anyone who isn’t pureblood. (Yes, this is Nazi Germany.) By his side is his henchman, Credence Barebone (Ezra Miller).

Complicating matters, there’s a magical baby deer, known as a Qilin, who can detect the purity of one’s soul; this fawn-like creature has been designated to select a new leader at the International Conference of Wizards.  Plus numerous, utterly inconsequential, political subplots.

On the Granger Gauge, “Fantastic Beasts: The Secrets of Dumbledore” is a dull, Dumble-snore 4 – two-and-a-half hours of murky tedium, making one want to beg the Potterverse to stop making these inferior spin-offs.