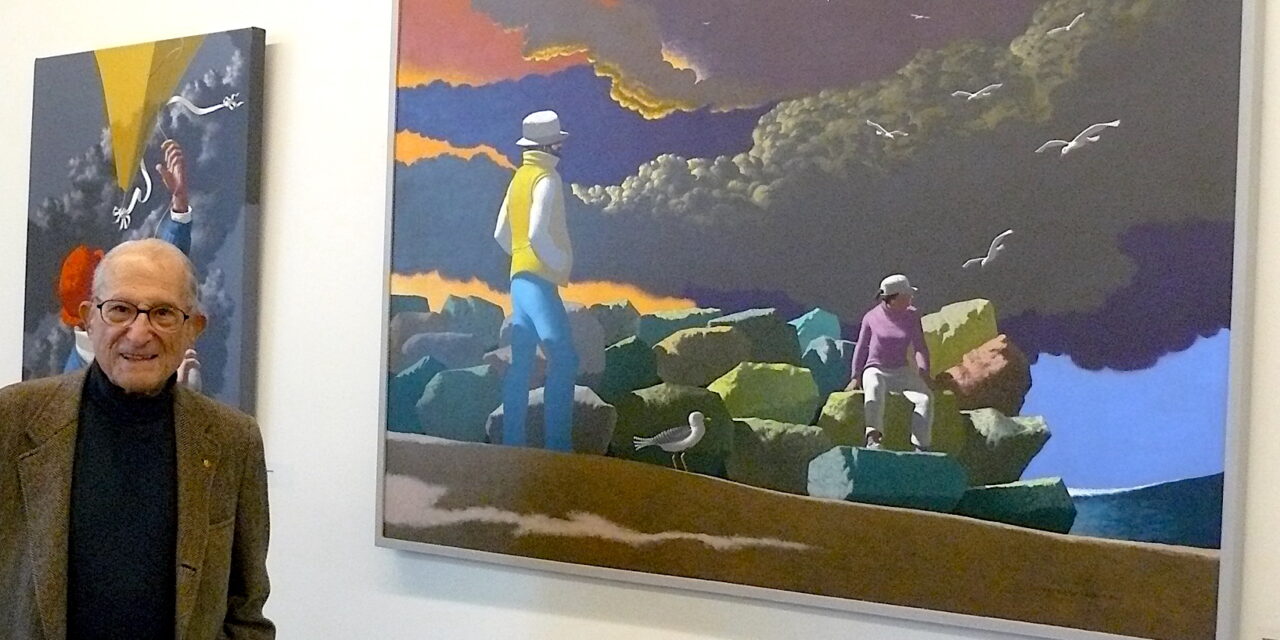 WESTPORT — Leonard Everett Fisher is not just an exemplar of Westport’s colorful history of artists, illustrators and cartoonists, and a prolific illustrator and artist himself – he’s also a great storyteller.

The exhibit of the 97-year-old’s work currently at the Westport Library “brings the library to life,” Library Director William Harmer told Fisher while recently surveying his work.

“We’re so happy and proud to have you here,” he told the artist.

“People are stopped in their tracks when they come in the door,” Jennifer Bangser, the library’s director of  Strategic Community Partnerships agreed. She was greeting Fisher, a Westport resident for more than 60 years, in one of the three library galleries devoted to the show.

The exhibit is another milestone in Fisher’s lengthy association with the Westport Library. He was a three-term library board president; donated several of his works to the library’s permanent collection, and helped acquire the library’s Black and White Works on Paper Collection, featuring more than 100 illustrations by noted Westport artists.

The collection of Fisher’s work on display spans decades, subjects and media, drawing the immediate attention of anyone interested in art — and many who may not have been.

His “Night Game,” for instance, is a favorite of many — capturing a moment during a ball game — depicting fans getting beer and cheering as one woman reads a book in the stands. “She’s not even interested in the game,” Fisher, a Mets fan, points out as he discusses how he works to capture the human experience.

The retrospective of his work chronicles his life, he said.

“The Warrior,” his painting of an ancient Greek soldier with a bronze helmet painted in great detail, was inspired by Fisher’s own military service. “I was in for three years, one month, 11 days and one half-hour,” he said, reminiscing about his years during World War II as a cartographer.

In his covert role in the U.S. Army’s topographic unit, Fisher drew battle maps of Italy, mapped the invasion of Japan, “which never happened,” he said — and produced navigational maps and maps of the occupation while stationed in Africa and elsewhere.

After two hospitalizations with dengue fever, he was ready to leave the military when the war was over, and refused  a commission. “I wanted out,” he said. “I went in as a boy and came out as a man.”

But Leonard Fisher’s story as an artist starts before the war, with a family that included a grandfather who drew charcoal drawings as he traveled across the ocean from Latvia, his father who was a ship designer in the military and who later  helped design the New York City subway system, and a brother, Richard, who was an architect for Yankee stadium. “I’m the fourth generation of a family who is visual … a fourth-generation doodler,”  the artist said.

Fisher grew up in Brooklyn and attended Brooklyn College, where he was majoring in art, paleontology and geology, when that combination drew the attention of the army’s map-making unit, he said. After his military service, he attended Yale University, where he earned a BFA and MFA. For many years, he served as a dean at the Whitney School of Art in New Haven — now Paier College of Art.

He and his wife Margery, who he said worked on computers for the first nuclear submarines, decided after the arrival of a baby daughter to move out of New Haven. “We were both New Yorkers and wanted something between New York and New Haven,” he said. “We wanted a town with a good school system — Westport.”

‘You can’t do this unless you’re passionate’

Through his years teaching at Yale, Paier and other positions, “I was illustrating and painting all along,” he said. “You have to have a focus, skill and craftsmanship.”

His focus included dissecting cadavers at Yale Medical School to learn human anatomy first hand, he said, as well as to study the details of printing and publishing in order to produce illustrations that met publishing standards and complemented stories. “You can’t do this unless you’re passionate,” he said.

His work is held in numerous collections around the world, including the National Gallery of Art and the Yale Art Gallery, and it has earned him many prestigious awards.

Fisher often is asked which of his many works is his favorite. It’s a portrait of his three children hanging in the bedroom he shares with his wife, he said, a painting that has never been viewed by anyone outside of his family. “Family is more important than the profession,” he said.

The artist plans to attend a Dec. 9 reception in his honor at the library — and he may have more work to add to the exhibition by then.